Hyperdrive News Coverage:
‘Hyperdrive’ Is the Best Netflix Show You’re Not Yet Watching

It’s “American Ninja Warrior.” But with cars. What else do you need to know? 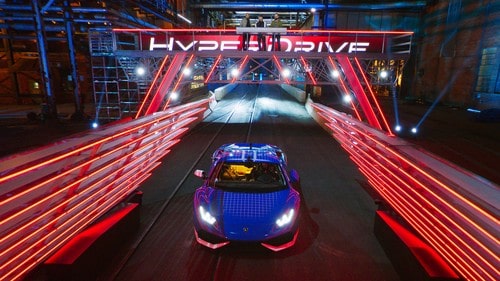 A preface: I am not a “car person,” I have no desire to drive a car, much less race one, and I don’t think I’ve ever paid full attention to a single Fast and the Furious movie. And yet—yet!—I’m obsessed with Hyperdrive, Netflix’s absurd hybrid of American Ninja Warrior and The Fast and the Furious: Tokyo Drift, the car show to woo non-car people, and the best competition show you’re not yet watching. (If you care about cars, I imagine it’s even better.) When cooking competitions feel tired, you’ve watched every episode of Queer Eye, and Terrace House is a little too sleepy, it’s time to watch Hyperdrive.

The premise is simple: _American Ninja Warrior_-style challenges, but done with super fast, brightly painted, super loud race cars. (Phrases like “V8 engine” are lost on me, but hey, maybe you’re into it!) The challenges are just as ridiculous: drivers have to drift side-to-side to hit targets, outrun huge blasts from a water cannon, spin in circles to smack even more targets, and execute narrow turns through shipping containers. All of this happens in a neon-lit course next to a Rochester factory, whose aesthetics are the cross between NASCAR and vaporwave I didn’t know I needed.

Because it’s reality TV, there are some real characters, like a dude named Fielding Shredder, a Japanese driver who calls himself the “drift sensei”, and a talented kid from Brazil whom they inexplicably never describe as “baby driver.” There’s plenty of amped-up drama, from the slight simmering of class tensions (A young South African racer’s father had to sell his tow trucks in order for her to compete! A rich man drives a heavily-modded $200,000+ Lamborghini!) to plenty of brutal car carnage.

You probably won’t gain anything from watching Hyperdrive, but you sure as hell will be entertained. This show is good [bangs gavel].