← Back To In The News

The Baltimore Orioles’ team batting average is .255, putting it smack in the middle of the major leagues.

The Izod IndyCar Series is batting 1.000 in Baltimore after the most successful inaugural American street racing event in the past 30 years.

An estimated 75,000 spectators turned out to see Will Power score a dominant victory over Oriol Servia and Tony Cannan, pulling him within five points of championship leader Dario Franchitti.

The massive turnout quieted the doubters who had criticized efforts to stage a street race in Baltimore’s Inner Harbor district.

And it also showed that there’s still hope for rebuilding Indy car racing into a mainstream sport again after more than a decade of it slipping into niche sport status.

They filled the 32,000 grandstand seats and they lined the fences bordering the 2.04-mile street circuit in the heart of Charm City.

And you got the feeling that they will all be back for next year’s Baltimore Grand Prix. Even without Danica on the grid.

You also got the feeling that the BGP will be back bigger and better than ever next year. With a title sponsor, for example.

The Baltimore Grand Prix already has jumped to No. 2 on IndyCar’s road racing hit parade, right behind the venerable 37-year-old Toyota Grand Prix of Long Beach and ahead of Mid-Ohio, Toronto and St. Petersburg.

Some people were saying Sunday that they thought the crowd at Baltimore was bigger than at Long Beach, the granddaddy of American street races.

It wasn’t a one-day crowd, either, like many IndyCar oval events attract. There were tens of thousands of fans on hand Friday and Saturday for a full bill of racing that included four open-wheel categories and an American Le Mans Series sports car race.

It served as a not-so-quiet reminder that while street racing events may not produce the wheel-to-wheel battles and frequent passing that are a hallmark of the best oval races, they are certainly appealing in their own right as a spectator experience.

Baltimore mayor Stephanie Rawlings-Blake was certainly breathing a sigh of relief after the success of the inaugural event.

In an election year, Rawlings-Blake was criticized for directing funds toward the grand prix as opposed to other causes.

But in what has been a rarity over the past 30 years, the Baltimore race lived up to its potential, with a racy street course, big-event ambience and atmosphere in abundance, and plenty of support from curious local race fans.

“There were so many people who, when we had traffic problems or parking problems or any delay, the naysayers certainly had their day,” Rawlings-Blake said.

“Until the race started.”

She added: “I want to thank everyone that was involved to make sure that the naysayers have been silenced.”

The participants from the IndyCar Series were certainly impressed with the reception they received from Baltimore.

“It’s unbelievable. I’ve never been in a place where it was this crowded and the fans were so passionate.” — Tony Kanaan

“What really struck me here was the attendance, the enthusiasm and the buzz here,” Penske Racing president Tim Cindric said. “I put this right up there with Long Beach. I was impressed with the knowledge of the fans, and obviously they came out in masses the past three days.

“You go through challenges anytime you go to a new street course,” he added. “Nobody has been through it before and we’re all smarter when we leave.”

“It’s unbelievable,” third-place finisher Kanaan said. “I’ve never been in a place where it was this crowded and the fans were so passionate. Back in Brazil it’s kind of like that, but yesterday night I’m walking to have dinner and it took me 45 minutes to walk four blocks because everybody was stopping me, taking pictures.

“Everybody worked hard and it is a beautiful track — bumpy and difficult,” TK added. “We complain a lot, but it made the racing very interesting. We didn’t see a lot of crashes and it was a very competitive race. But I’m amazed with the crowd. Apart from Indianapolis, I haven’t seen a street course with that many people.”

Those packed grandstands and local hotels and restaurants on Friday, Saturday and Sunday can only help in that endeavor.

For three decades, street races from the Meadowlands to Miami have been jockeying to call themselves the “Long Beach of the East.”

And in the Baltimore Grand Prix, it looks like INDYCAR finally found one that deserves that crown. 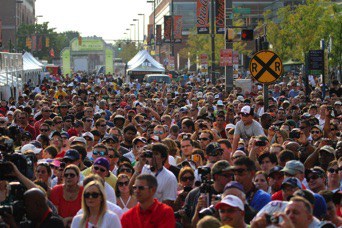 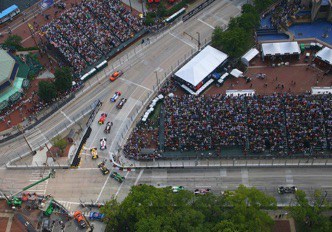